This is my first book and the first book of the Throne of Storms series. 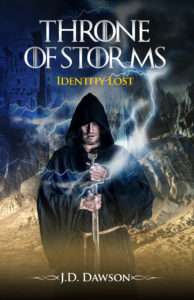 An ancient power all but lost, asserts its might in the realm of Alvita. Through the centuries the power of the Storm has been concentrated in the Lords of the High Families. Now, with only a handful of powerful Stormbringer’s left, the Witch Queen begins her quest to rebuild her families bloodlines and remove the Auvil family from the Throne of Storms through dangerous alliances, death, seduction and rebirth. Even as she moves against the King a dangerous new enemy has landed on the shores of Alvita and her own seeds of rebellion threaten to unravel because of her alliance with the Black Dragon.

This message is only visible to admins.

Error: (#10) To use "Page Public Content Access", your use of this endpoint must be reviewed and approved by Facebook.
Solution: See here for how to solve this error

How to use a Long Call, or not to as the case may be. #options #longcall #delta #trade4profits #stockmarket
trade4profits.com/the-long-call ...

The long call is one of the most basic option strategies you can use when trading options. It is relatively simple and easy to understand, however most people forget about the effect of Delta on the position.
View on Facebook
·Share

How much do you need to retire in relative comfort? #options #retirement #money #investing #trade4profits
trade4profits.com/how-much-do-you-need-to-retire-in-comfort ...

How much do you Need to Retire in Comfort? | | Trade4Profits.com

Thoughts of retirement started flowing through the minds of most people the very day they got their first jobs. In most cases, your employer started thinking about it right there too. After all, no condition is permanent. Life is in phases; and the earlier you realize that, the better.
View on Facebook
·Share

The term personal finance means managing your money. It starts with saving your money and investing it in the right way. This includes making a well-planned budget, sticking to it, planning insurance, banking and managing all finances. Personal finance goes a long way as It starts as soon as you get...
View on Facebook
·Share